This picture was taken in 1973, showing the farm house and to the right the outbuildings which included a large barn, stables and pig sties. Further on to the right and out of sight was the large orchard. In the foreground are some of the girls that we used to ride with.

My twin brother Michael and I used to visit the farm during the school holidays and weekends to chat to Arthur Chamberlain who would usually be propping up a gate on  the approach to the farm watching the horses and riders in the big field next to the farm house, this was the real reason that we were there.

We pestered the girls so much that they eventually taught us both to ride. They insisted on teaching us the hard way without a saddle or reins on a lunge rein. They had great fun watching us bouncing around and falling off. We were determined to get it and soon advanced with such good training. It wasn’t long before we too had a pony at the farm and our parents were also spending a lot of time down there. At that time the Nature Reserve wasn’t as heavily used by walkers as it is now so we could ride around the soft paths all the way over to Clifton Grove.

Arthur Chamberlain retired in 1970 and decided to move away and my family and I moved in
shortly after. We soon settled in to the good life and my parents Rose and Arthur Tindall adapted quickly, keeping chickens and pigs, growing their own fruit and veg and managing the vast orchard. They also collected the fishing tickets along the stretch of the Trent from the bend by the Ferry to just after the small weir in Beeston. My parents were always busy and soon established themselves with local ramblers and the regulars who used the ferry and who also called in to the farm to buy eggs and enjoy a cuppa and large slice of cake with my Mum.

The ferry across to Barton in Fabis was linked to Ferry Farm and I believe, had been since before 1774. The height of its popularity was during the Victorian era when there were two ferry boats running. At that time the landing stage was close to the entrance of the mouth of the River Erewash, our landing stage was further upstream, opposite a small bungalow at the side of the river.

During the 1970s my Father would take regulars over to Barton in Fabis and be there at an agreed time to bring them back. There was always a joke when taking anyone over that we charged 50p to go over and £1 to come back! Dad would also use the boat to clear the weeds from the fishing spots along the river bank and keep the edges clear of debris after a high river. He would take the boat out of the water during the hard winter months to tar the bottom and paint it ready for the spring.

It wasn’t the easiest boat to row being flat bottomed and wide enough for three people to sit side by side but Dad taught us how to row safely across the river by rowing hard against the current upriver away from the landing stage before crossing the fast current then letting the slower current guide us into the landing stage on the other side. Occasionally my brother and I would pack a picnic, put our bikes in the boat and row across to the Barton in Fabis side to explore. We always felt that being on the other side felt like being a long way from home.

In order to earn some pocket money my brother and I would only have to sit on the boat on sunny day and people would stop and ask to be taken across. I can’t remember advertising that it was a ferry service, they just seemed to know. Everyone gave us a pick up time, and I can’t remember ever letting anyone down by not being there. No mobile phones then, it was all based on trust!

The farm was compulsory purchased by the Attenborough Gravel Company who wanted to
dredge the land around the farm for valuable gravel for the building trade. It was slowly demolished during the late 1970s. The ferry stopped running when my parents left the farm and moved to Beeston Rylands. The area looks very different now, all traces of the farm and buildings have been obliterated and nature has taken over, unless you know where to look!
Faith Kirk

Ferryman George Chamberlain was still working Barton ferry at 90 – what an inspiration!

These cuttings from Nottingham Guardian on 12/10/1949 were found in Nottingham Central Library archives.

This fascinating cutting found in the archives at Nottingham Central Library refers to the importance of Barton Ferry in preventing the insurrection known as the ‘Pilgrimage of Grace’ in 1536: http://en.wikipedia.org/wiki/Pilgrimage_of_Grace

In Victorian times visitors came to Barton in Fabis from Attenborough via the Barton Ferry which, as indicated on Chapman’s Map of Nottinghamshire, operated from 1774 up until the early 1960s. The village used to be a quaker village, and was known for its tea houses and (despite the abstinence of quakers), the villagers’ home made cider.

I heard tell of a shire horse stallion being transported across the river from Barton to cover the mares on the Attenborough side of the river when horses were still being used to work the land on farms in the area.

This booklet tells how farmer Harry  Plowright who, up until the early 1970s still used Shire Horses on his farm instead of a tractor. The Plowright family were responsible for breeding the Shire horses for the local Shipstones brewery and won awards at the annual ploughing competitions for ploughing with a pair of horses.

The exact location of the old Barton Ferry? 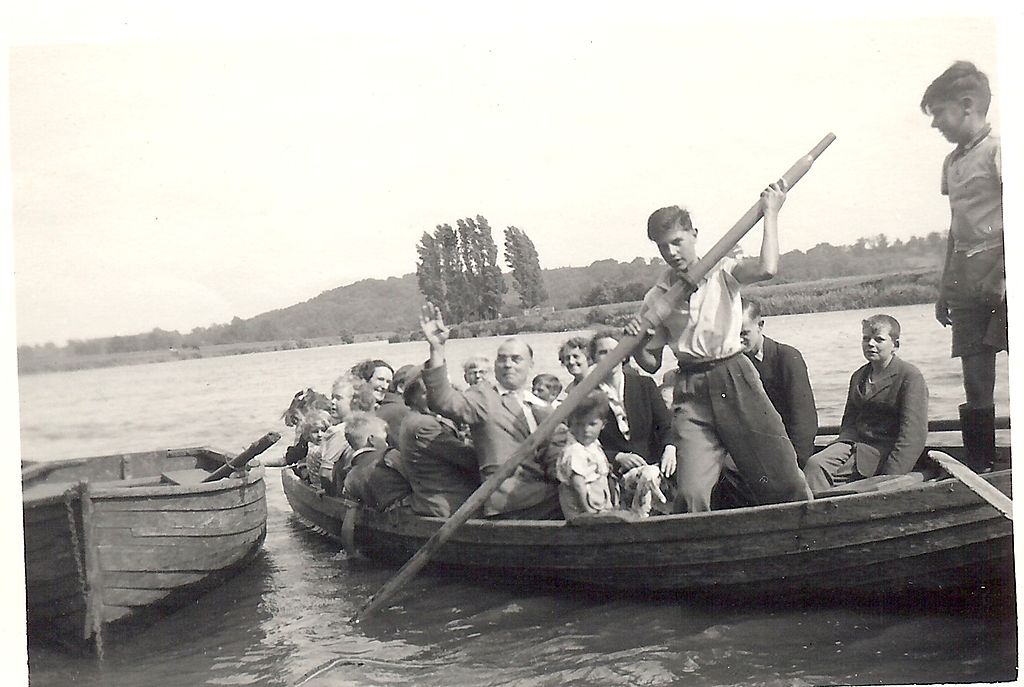